The computer science chapter at my alma mater, KTH, arranges an advent calendar called “dJulkalendern”. It is a CTF-like puzzle with challenges (almost) every day until christmas and also a competition.

The puzzles are not really security focused like regular CTF but more broader IT related puzzles. The competiton was held in Swedish but I will still do this writeup in English since anyone might learn a thing or two from it. This means that I might translate clues and other texts freely into English. If you want to see everything verbatim, go to the challenge site. This year, there were a puzzle every weekday and I will go through and explain them all. To prevent this post from being too long, I will be pretty brief in my explanations. If you have any questions or solved something in a different way, please comment below.

We are given a description:

This window, Window -1, is a practice window of sorts. It does not count toward the final score. The solution is the 31st word of the second mail sent by Santa, as shown in the Lore Page. Good luck!

We are given an encrypted message:

Running this gives us the answer permanent.

We are given a couple of instruction steps including a large block of digits. Taking each digit and colouring it with a different colour reveals the password.

Running this gives the following image:

In the image you can just barely make out the word shops.

Day 3: Ho Ho Ho-uston, we have a problem

The challenge gives you instructions how to connect to the MUD using netcat. Connecting to the server presents you with a classic text-based adventure game. The game involves walking around, picking up some items, using them in various places and eventually flipping the light switch which gives you the following message:

You are given a number of log files, all named x,y.log and containing one character each. By taking the filename of the log as a coordinate and placing the contents of the file at that location in a grid we can render an image:

Running this code prints the following:

This challenge sends you to a quiz page very similar to Kahoot! For every question a request is made to the following URL: http://djul-2021-kahootish.medusa.datasektionen.se/getStatus/containing a response like this:

By looking at the 1-indexed value in currentA we know which is the correct answer to the question and we can just keep answering correct until we have accumulated 10 points and we get a popup saying “The word is: bumfuzzle”.

We are given a zip file containing both a .csv and an .xlsx file as well as an info text saying the contents are the same and we can use whichever.

The csv contains one line of milk and cookie emojis. We can get rid of the commas and replace them with 0 and 1 without losing any information. We note that the data is 441 characters long which happens to be 21x21. Organising the data into a square reveals a QR code pattern. Replacing the 0 with “#” and 1 with “ “ makes it even more clear. We can create an image from this using Pillow and then decode it with the zbarimg tool.

Day 9: To ponder, or not to ponder

Running this gives the answer magma.

This challenge is another MUD. When you connect to the server you are presented with a series of rooms. In each room, the goal is to visit every square of the room exactly once. This is called a “self-avoiding walk” and appears in many variations, including some of the 2D Zelda games. Once you have solved all the rooms you are greeted with the following message:

Day 13: Have a crack at cracking

This challenge provides you with a website with a login form. The hash of the password for the first user is a01fe2d5aea3c1360eb5b8eb64b668af. Googling this hash shows that the password is hyperventilation.

We disregard the claim about the word not being in the dictionary and prepare a mutation rule for the flavour of leetspeek they are using.

This challenge revolves around the Library of Babel which is also implemented as a website at: http://libraryofbabel.info

You are supposed to search for various texts and answer which book, shelf etc they can be found in. Eventually you will get the message A DEAD END. YOU WERE DECEIVED. but this is fake and by looking at the html source code there will be some final steps in the CSS, etc which will eventually lead you to an image containing some purple text in the lower left corner: The word is angler.

In this challenge we are given a video file with a santa dancing on top of some squares. The squares represent a board of Game of Life. By setting up the state from the video and simulating one step of Game of Life, the cells spell out the word hammer.

The challenge consists of an ELF binary. Disassembling it reveals that there is a function called christmas_present which is never called by the code. Looking closer at the instructions in the function they don’t really make sense but taking the first letter of some of them spell out the password dollar. 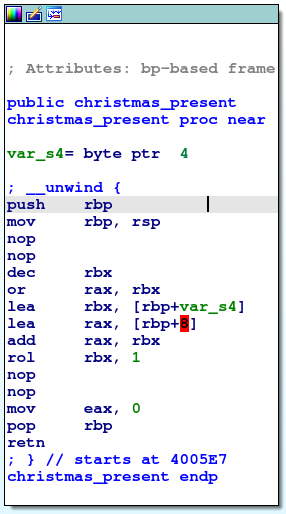 Here we get another MUD which we can connect to. We are presented with a huge grid but after taking 16 actions the MUD crashes and gives us a link to a logfile:

The linked file is a PGN file which is a format for storing chess games. Viewing the game in a PGN viewer we can see that there are 56 moves which happens to be 7x8. By looking at each move and see if it moves to a black or white square and treating this as a 1 or 0 we can decode the moves as eight 7-bit numbers representing ASCII characters. We don’t know if a white square represents a 1 or 0 so we try both possibilities.

Day 20: The Polar Express, or T. Hanks for the Train

In this challenge we are given a LogiSim schematic with a lock. The lock takes five 7-bit values as input. By studying the schematic we can translate it into the following Z3 code and solve it.

Running this gives the output

In this challenge we are given the following “map”

Notice that the character are either lower or upper case. Treating each pair of characters as an X/Y coordinate pair- with coordinates ranging from A to K and lowercase as 0 and uppercase as 1 we can construct the following grid:

Reading rom the grid we can find eight 8-bit sequences which can be read forwards or backwards.

In the final real challenge we are provided with a website containing an empty four by four grid and numbers in the background. The numbers only contain the digits 0-7 and can therefore be interpreted as octal numbers:

Doing this and then decoding them as ASCII gives us the following grid:

If we read this column by column instead of row by row we get ?showprompt=true. Adding this to the URL shows an input box and a sound clip called birthyearoftheartist.ogg. Using Shazam to identify the song reveals that it is Vanessa’s First Smiles by Richard Clayderman who was born in 1953. Entering this in the input show an image called video.mp4.png which looks like it should be a video clip. Downloading the file and inspecting it with binwalk reveals that it is both a PNG image and a ZIP archive. Unzipping the image gives us a file called last step.mp4 which is a slightly corrupted MP4 file. Using a hex editor such as 010Editor and another MP4 file as reference we can repair the file by fixing the names of a few parts of the file and playing the video with VLC. This gives us the password consumer.

We are given the instructions:

The solution to this window is “Moses’ “ last name.

Moses Purist can be rearranged into Sus Imposter which gives the final password imposter.

I managed to finish in 10th place this year and out of 12 people solving all challenges I was the only one who did it on my own. Thanks a lot to the organisers for another great edition of Djulkalendern. Looking forward to the next year.